Hello, World!!! This week has been quite a week. Parts of it emotional as an unexpected family emergency happened which I will tell you about later in the post. I started this week traveling from Seattle to Tacoma for a peer conference. Tacoma is about thirty miles south of Seattle. I took the Amtrak train as I love taking the train because it is really relaxing for me. It beats taking public transportation. One of my favorite parts of traveling by train happens to be the views I am able to see. I did take a picture of something that I normally don’t have time to take due to the speed of the trains but I was able to take a picture of another train. The train is pictured below: 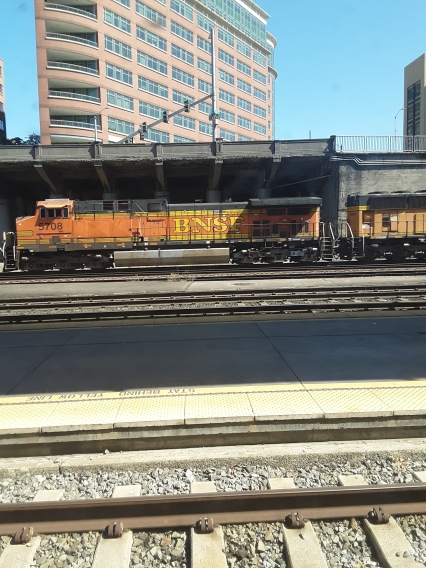 A picture of a BNSF train. Thankfully, both the train I was on and the BNSF train were going slow enough to capture the picture.

Anyway, when I arrived to the hotel for the peer conference I wasn’t expecting it to be as big as it was. It is a twenty six story hotel with a lot of amenities but sadly they did not have a swimming pool. As disappointed as I was that there was not a swimming pool, the view from my room on the twentieth floor was awesome. I had a view of Mount Rainier. Below is a picture of the view I had of Mount Rainier as well as the Tacoma Dome: 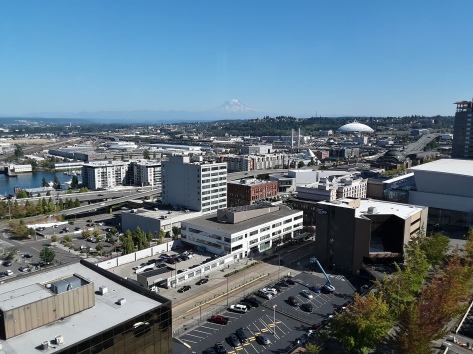 View from my hotel room. Mount Rainier as the Tacoma Dome.

The peer conference was great and loved the fact the I was with about five hundred other people in recovery with a mental health challenge and/or a Substance Use Disorder (SUD). The workshops I attended were awesome and the best part about being at the conference was being able to volunteer and be of service to fellow peer counselors.

Sadly, during the morning keynote speaker on the second and final day, I received a call from my grandpa telling me that my dad was going to have emergency surgery later that day. My grandpa and I discussed that staying at the conference was the best thing for me to do since the surgery wasn’t going to be till four in the afternoon and that I would have plenty of support from my friends at the conference as sitting around the hospital wouldn’t be helpful for me. I went to a couple of friends to let them know what was going on and they agreed with my decision with staying at the conference for a few more hours because even though my dad was having emergency surgery it was scheduled for later in the day which was a good sign. My friends and I discussed that staying at the conference was a good idea but we all agreed that leaving at an earlier time would also be a good idea. So, I was able to arrange for someone to take over my volunteer duties and leave to take the three in the afternoon train instead of a train after the conference was over. I am grateful that I took the three o’clock train as my uncle picked me up and I dropped off my luggage at home and then went to the hospital.

As I waited at the hospital while my dad was getting surgery a lot of my fellow peer who are friends checked in with me via text or phone call. Having the support of friends and my family as my dad was getting surgery made me feel blessed. I am grateful for friends who have been checking up on me during my dads surgery as well as after his surgery. My dad did well during the surgery and is now in the ICU. He is doing well even though he is in the ICU. He has his sense of humor which is a great thing. I am glad my dad is doing better. I am beyond grateful to have friends in recovery checking in on me to see how I am doing and I am doing pretty good considering my dad had surgery.

Exploring What Captivates, Inspires, and Intrigues Us.