A Pisces, you will get one

brook is a meditative

Good Morning, World!!! Today’s assignment or topic from the photography course I am taking through WordPress is “water.” While on my many walks through the trails of Cowen and Ravenna Parks I took my camera and took a picture of the tiny waterfall from a small stream also known as a brook. I just love all the greenery around it. I love being able to enjoy nature while being in the city at the same time. For those who are sight impaired, I have included a caption with the photo and hope that you are able use the caption to be of help.

First I hear you;

At first it is just a trickle.

As I get closer your trickle gets louder;

Now I spot you.

You are just a brook.

A brook calling out to me;

Calling out to me to just take a deep breath and enjoy the moment.

I thank you for the moment of being in the present.

I thank you small brook for the breath.

As peaceful as a sleeping,

baby in their crib.

babbling as it does in the woods,

Good Afternoon, World!!! Today’s topic is of solitude and I thought of the perfect picture from Christmas of 2017 in Olympia, Washington.

The above picture is from my hotel room I stayed at while visiting family for the holidays. As you can see I had a white Christmas. I stayed in Olympia, Washington as mentioned which is the state capital. You can see tiny bit of it three quarters of the way up on the left. So the solitude part of this picture was when I walked around the lake while listening to the sounds around me. I went back to the hotel room and had hot chocolate while looking out the window to the scene that is pictured above.

Thank you for reading. Have a great day. Peace Out, World!!!

Hello, World!!! When the topic of connect came up I thought to myself “well this is up for interpretation” and that’s what the assignment stated as well. I’ll be talking about how waterways are connected. Specifically, I will be talking about the Ballard Locks. Let me give you a brief history of the Locks.

Operated by the US Army Corps of Engineers, the locks were formally opened on July 4, 1917, although the first ship passed on August 3, 1916. They were named after US Army Major Hiram M. Chittenden, the Seattle District Engineer for the Corps of Engineers from April 1906 to September 1908. Its fondly known to Seattleites as the Ballard Locks or Locks.

The Big Lock full of boats waiting to continue on their journey from the Puget Sound to Lake Union on Memorial Day of 2017. The water is filling up to lake level as it was low tide in the Puget Sound.  Shot is Looking toward the lake.

Thank you for reading. As realize I love water. This is one of the many places that gives me peace. Have a great day. Peace Out, World

When I found out that todays topic to photograph was water I became ecstatic as water in my peaceful place. Its the place where I feel a sense contentment. Both the emotions of peacefulness and contentment are rare for me to experience which is why I love the water so much. 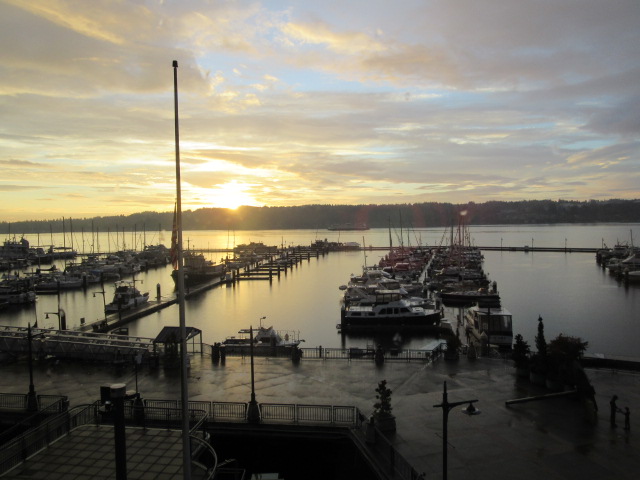 The above picture is taken from a hotel that I stay at from time to time in Bremerton, Washington. It’s just a ferry ride from Seattle. The hotel I stay at and the Bremerton ferry terminal are near the Bremerton Navy Base and Bremerton (Puget Sound) Shipyard. The picture above is of a sunrise over the Puget Sound. This picture brings me peace.

Thank for reading. Have a great Sunday everyone. Peace Out, World!!!

Peaceful to our spiritual selves.

Exploring What Captivates, Inspires, and Intrigues Us.