Good Evening, World!!! I’m feeling slightly calmer than I was an hour or two of ago. That is because I used the Calm app and did a few pages in my mindfulness workbook. It appears that todays topic in both avenues of my mindfulness was experiences have a beginning and an end. Mainly talking about letting go of emotions. Both the app and the workbook was discussing on how to let go of emotions and they don’t last forever. Even the good emotions.

This is helping me come to terms with both the negative and positive emotions that a coming up for me in my life. Such as my grandma being in hospice and me having job interviews. I’m hoping that with continued mindfulness and meditation practice that I will just be able to let go of emotions or at least be accepting of them.

Thank you for reading. Have a wonderful evening and Peace Out World!!!

Good Afternoon, World!!! I had my interview this morning. They were already running late at 8:30 in the morning but considering what I witnessed in the waiting room I understood. The interviewers were “impressed” how I handled the client crisis and helped with the other clients in the waiting room. I asked the other clients what music they liked and started playing music suggestions from my phone.  I was informed that it helped the need to deal with the crisis at hand without creating a bigger one. I wasn’t doing anything out of the norm for me. I was just doing what was needed at the time. In the interview they asked what ways I would handle a client in crisis in a treatment room. I said I would have art supplies available at hand. Again, I impressed them and wasn’t attempting to do so.

When I got home from the interview I turned on some music and did some art. Specifically, painting about recovery. Like I’ve said in other post, art helps me express my emotions and I must be feeling hopeful.

Thank you for reading. Have a great rest of the day. I know I will. Peace Out, World!!!

Hello, World!!! When the topic of connect came up I thought to myself “well this is up for interpretation” and that’s what the assignment stated as well. I’ll be talking about how waterways are connected. Specifically, I will be talking about the Ballard Locks. Let me give you a brief history of the Locks.

Operated by the US Army Corps of Engineers, the locks were formally opened on July 4, 1917, although the first ship passed on August 3, 1916. They were named after US Army Major Hiram M. Chittenden, the Seattle District Engineer for the Corps of Engineers from April 1906 to September 1908. Its fondly known to Seattleites as the Ballard Locks or Locks. 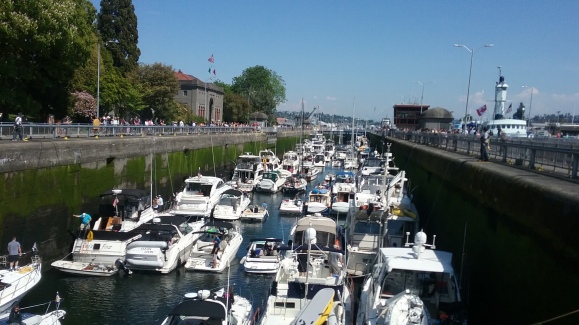 The Big Lock full of boats waiting to continue on their journey from the Puget Sound to Lake Union on Memorial Day of 2017. The water is filling up to lake level as it was low tide in the Puget Sound.  Shot is Looking toward the lake.

Thank you for reading. As realize I love water. This is one of the many places that gives me peace. Have a great day. Peace Out, World

Good Morning!!! I sit here at my laptop this morning figuring out how it takes courage to follow my own path. Part of why I am thinking about this is because of my interview today as well as tomorrow.

As many of you know my path includes getting back into working as a Peer Specialist. If the interviews don’t work out into getting jobs, I plan on going back to school. Going to school to get an Associates of Applied Science in Social and Human Services and then a Bachelors in Applied Behavior Science at a local community colleges. While getting an education I plan on continuing to volunteer.

Another thing I am planning on doing weather I’m working or going to school is to set up art shows displaying art that consumers do at conferences that are Peer and/or Behavioral Health and/or Legislative related. This is to help show that no matter if one has a job or not we can live productive lives through art.

Thank you for reading. Have a great day. Peace Out, World!!!

Good Morning, World!!! It is 3:33 in the morning and I am up however I am excited because I actually got some sleep. Some much needed sleep. Sleep that I was thrilled to get.

After I eat I think I’m going to do my mindfulness workbook as it helps me stay focused and learn how to be my mindful of any situation I may be currently in. One thing I need to be mindful of is my job interview that is in roughly five hours from now.

I am looking forward to my job interview. It’s with any agency that is all for Peers. They are known to the community as being “Pro-Peer.” Something, that I am for is an agency that creates a good environment for Peer Specialist.

I should get going so I can follow through with what I told you I would do. I hope everyone has a good Tuesday and good day at work or whatever you do. Peace Out, World!!!!

On The Road Less Traveled

A regular gal who likes to stop and smell the flowers.